The exhaust system has been a debate for some time.  Being a longitudinal V8, I have exhaust manifolds on both sides of the engine bay.  On most cars with a similar driveline, these manifolds exit into tubes that follow the transmission into the trans tunnel, and run underneath the driveshaft until they reach the rear of the car.  Here, they go up and over, or even under, the rear axle, into a muffler, and finally the exhaust exits out the tailpipe.  Well, this poses a problem.  The tunnel is tight around the transmission to increase interior room and especially leg room, too tight for exhaust pipes to run next to the transmission.  Under the transmission, or under the car at all might work, except that the current ground clearance is set at 5" - running 2.5" pipes would reduce the clearance to less than 2.5", unacceptable for a street car.  The underside of the car is a perfectly flat undertray, with no place to tuck the exhaust pipes into, without intruding into the passenger compartment.

What then, if the pipes cannot be routed under the car?  Sidepipes are a great option, but have some drawbacks as those familiar with them can attest to, usually referring to the burn scars on their legs.  Heat shields help, but the pipes are still literally running right next to your legs and body as you drive, and are going to be at least somewhat hot.  I was actually thinking about a sport bike when I modeled this muffler/rear fender idea, and mind you it is a bit rough, but gets the point across.  Again, picture a sport bike where the exhaust exits out over the center of the rear tire. 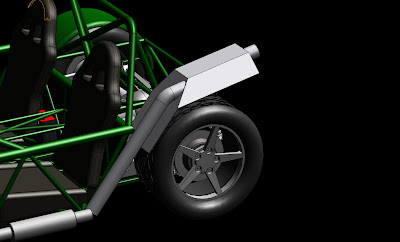 The other thought was to simply shorten the sidepipes - a lot.  For this to work, the round canister muffler would be moved close to the engine, just behind the front wheels.  The muffler would end just before the front corner of the passenger compartment, ending with a rectangular angled tip. 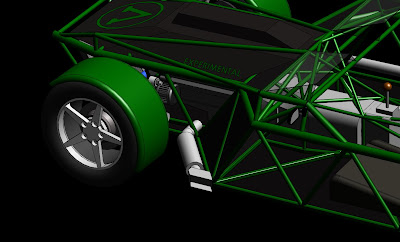 Posted by Jesse Busby at 7:27 PM No comments:

Well, long story short, the transmission I bought was out of a wrecked car, and turned out to have some serious issues with bent and broken internal parts.  The seller had been open and honest about the transmission thus far, and had even gone so far as to give a written guarantee that it was in great shape for the mileage, and unfortunately I had to take him up on it after hearing back from the trans shop.  I thank him for being a good and honest seller, not everyone would have held up their end of the bargain.  (Thank you Jake)  At this point the trans is back from the shop, rebuilt back to stock specs, and I'll be continuing to measure it and update the 3d model so that the transmission tunnel of the frame can be adjusted.
Posted by Jesse Busby at 6:52 PM No comments: