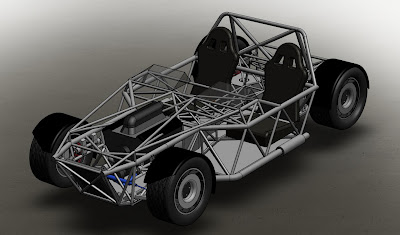 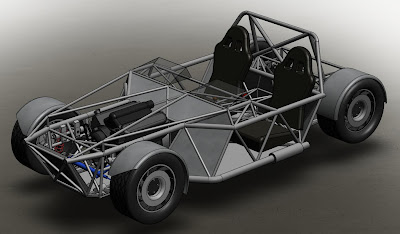 Not a lot of options as far as exhaust systems go..  The bottom of the car is flat aluminum sheet, the transmission/driveshaft tunnel is narrow and filled by the trans and driveshaft, and given the car's construction, radiant heat from the exhaust near the passenger compartment could be a real hot problem.  The only option left appears to be sidepipes, corvette or cobra style.  Radiant heat is still a big problem, and will be addressed by heat shields and header wrap.  Unfortunately, it will also be very easy to burn your leg entering or entering the car as well..  This will probably be addressed by a heat shield as well, but something more like perforated aluminum, or something else shiny and aesthetic.  Thus, the exhaust will begin with LS1 exhaust manifolds or stainless steel shorty headers, neck down to 2.5" pipe, bend out and follow the leading edge of the passenger compartment, then bend again to follow the side of the passenger compartment, into a 4" round stainless steel Magnaflow perforated muffler, and finally exiting just before the rear tire, maybe with a turnout.  Anyone with a better idea, please speak up!

Still working on getting all the parts of the total assembly back together with the new frame.  On a positive note, my engine and transmission weights were a bit on the heavy side, so the car is about 100 lbs lighter than originally estimated, which will make the 1600 lb total weight goal easier to meet.  Lighter is better. 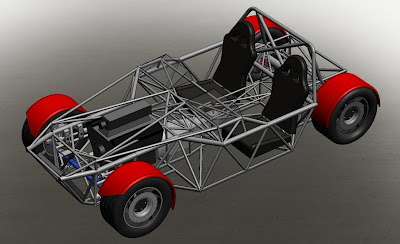 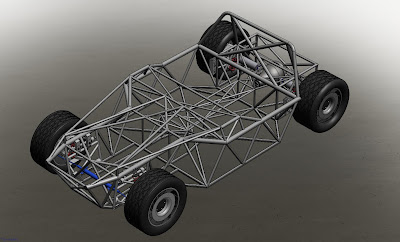 Difficult to see perhaps, but this is an entirely new frame rendering, starting from scratch and building off of the three main designs I've been working on.  This version incorporates the innovations and advantages produced by those three.  It features integrated mounting brackets, improved load paths, better aesthetics, and is sized to match the front and rear Corvette suspensions precisely.  It is also in the process of being gone through for lightness and ease of fabrication.  Current test weight of the frame model is 235 lbs.  Also testing all moving components through their range of motion to verify that there are no problems with clearances between parts.  I'll be adding the rest of the components asap to complete what I can of this revision mockup.
Posted by Jesse Busby at 11:06 PM No comments: 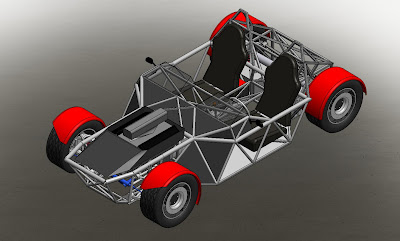 Still working on the brackets for the rear...  But in the meantime, who doesn't like a little red?
Posted by Jesse Busby at 11:50 PM No comments: 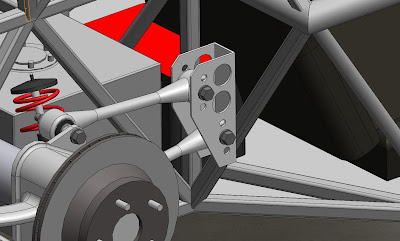 Have been working on mating the C4 rear suspension to the Spartan frame.  Made some changes in the frame to reflect where mounting points would be needed, for sufficient clearance of moving parts, and to try and get rid of some dead space.  This is the trailing arm setup as it sits now, I just need to decide how I want it to attach to the frame - should it bolt on, or be welded in permanently?
Posted by Jesse Busby at 4:47 PM 1 comment: 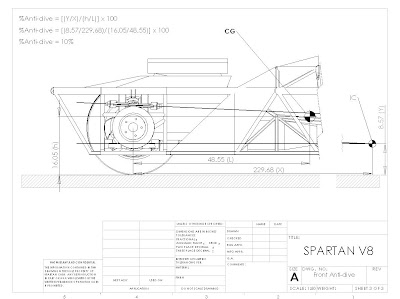 Went back through the front suspension and recalculated the front anti-dive using a different method..  Utilizing around 10% anti-dive as a compromise between the factory geometry (lots of anti-dive!) and this car's anti-dive needs (little to none).
Posted by Jesse Busby at 5:11 PM No comments: 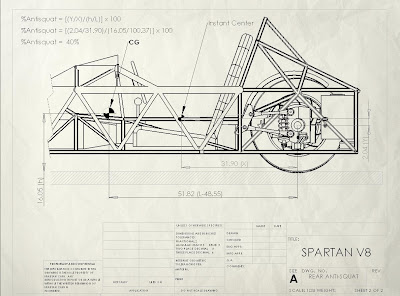 Assembled the rear suspension as close as I could get to the factory Corvette specifications, for a good starting point.  As the Spartan will have a somewhat higher ride frequency and experience less weight transfer than the 'Vette, it won't be needing this much anti-squat.  I intend to move the trailing arm brackets down, bringing the instant centers down, and reducing the amount of anti-squat to the 0-20% range, as well as providing multiple mounting holes so that the anti-squat remains adjustable.
Posted by Jesse Busby at 8:41 PM No comments:

Weighed the Corvette parts today.  This allows me to figure their weights into the overall weight of the vehicle, and it also allows me to better approximate unsprung weights for the rear corners.  This will aid in spring/damper calculations down the road.

So the total rear end assembly weight is 202 lbs, not including the wheels.

Unsprung weight for each rear corner is then near 100 lbs, higher than I'd like.  I hope to switch to a lighter wheel/tire combo at some point.
Posted by Jesse Busby at 1:52 PM No comments: 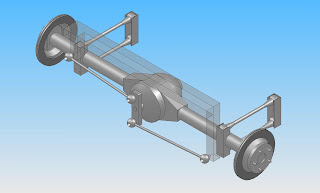 Running into some difficulties in getting a Watt's link to work in SolidWorks, may have to approximate the movement with a Panhard bar for the time being.
Posted by Jesse Busby at 4:12 PM No comments:

Began work on modeling a solid rear, but I don't have much to work off of yet.  Looking into the Chevy 7.5" corporate rear, with any luck I'll find a newer one in good shape with disc brakes on a later model Camaro or similar.  Next will be the brackets for the trailing arms and coilovers. 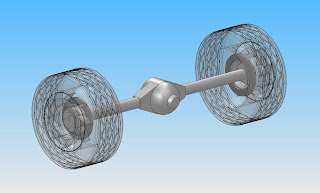 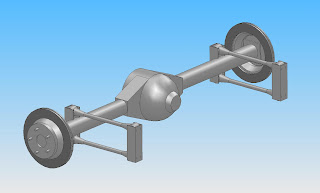 Here are the latest two versions of the frame: 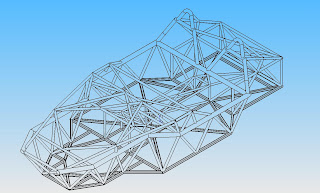 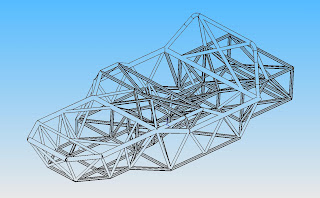 The newer version has a single roll hoop and is somewhat simplified. Once the front and rear suspensions are finished, they can be added to the frame assembly; this will show clearly what dimensions need to be modified, it will be clear exactly where the suspension forces are acting on the frame, and the triangulation can be modified to better counter those forces. The second, newer version is also missing a few aesthetic tubes in the front cowl area, as well as having a few extra triangulating tubes on the bottom of the transmission tunnel. Both these items are due to this model also being an FEA test model. In the actual frame, aluminum sheet metal will form a shear panel on the underside of the tunnel, and steel tubes will be added back in the front similar to the earlier model.
Posted by Jesse Busby at 4:44 PM No comments:


I wondered what sort of emblem or badge would look good on the nose of the car, so I took the liberty of drawing two possibilities, in SolidWorks naturally. Both are greek shield shaped, but with different bas relief designs. 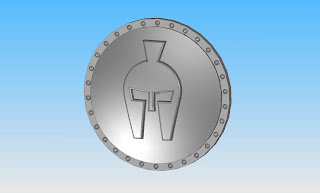 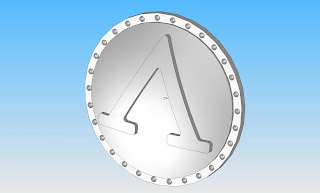 The design work continues on the Spartan V8, currently working on the rear suspension (shown below, in SolidWorks). I've been debating what to do here, as I could use the Corvette rear end as originally intended, a different production car's independent rear suspension, a solid rear (live axle) setup, or custom build my own independent design. Reasons abound for each, and there is no clear winner at the moment..

I like the corvette parts, they look nice and obviously work, however there are some shortcomings in the design, its heavy, and must use mushy rubber bushings (due to each joint needing a fair amount of misalignment). Aluminum is used extensively, and won't corrode any more than it already has, or could be polished if desired. Toe adjustment and camber adjustments are built in, although camber gain is essentially already set. It does match up with the corvette front end nicely. 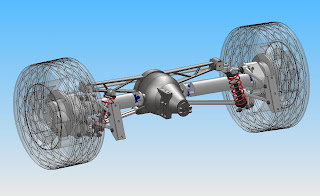 Using another car's independent rear end parts are a possibility, however they must be rated to deal with 300+ hp and 300+ ft-lbs. Keeping the same lug pattern as the front means they essentially must be GM parts, or custom parts ($$$). Keeping the same track width (spacers affect geometry!) will be tricky as well..

A live axle setup would work well in a straight line and in the turns due to almost zero camber change, and would likely handle the power and torque just fine, but will be heavy. In particular, the unsprung weight will be high, perhaps causing the rear to lose grip in bumpy corners. It would likely be easier to mount as well, and adjustability could be built in to change the antisquat to suit the driver. Spacers could be used to get the desired width as well, as geometry isn't affected so much in this case. I need to get an accurate weight for a complete disc brake rear to make a judgement here.

A custom suspension could theoretically do exactly what I want, and combine the best things from the other types, BUT: this will add considerably more design time to the project, I'd like to start building before winter hits; will likely drive the project cost up exponentially as custom shafts, hubs, cv joints, etc. are expensive; even with the best intentions, I might just uncover similar or worse problems with my design than the others, only real testing would tell..
Posted by Jesse Busby at 3:44 PM 2 comments:


Estimated Performance (with base engine)