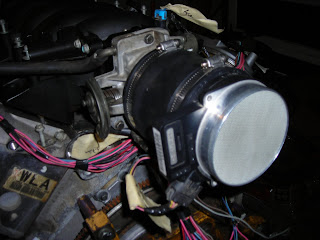 Still working on the custom wiring harness, but have just about all the wires incorporated in.  Added the 5 wire MAF with a rubber coupling, it seems to all fit together nicely.  Since the intake manifold is rotated 180 degrees, the MAF will face the cockpit, and in fact there will be another rubber coupling to the filter, which will actually sit inside the cockpit, under the dash in between the driver and passenger.  Should make for a rather vocal engine, with sidepipe exhausts roaring and intake reasonance whining.  All together it should make it a very raw and visceral experience.
Posted by Jesse Busby at 9:01 PM


Estimated Performance (with base engine)